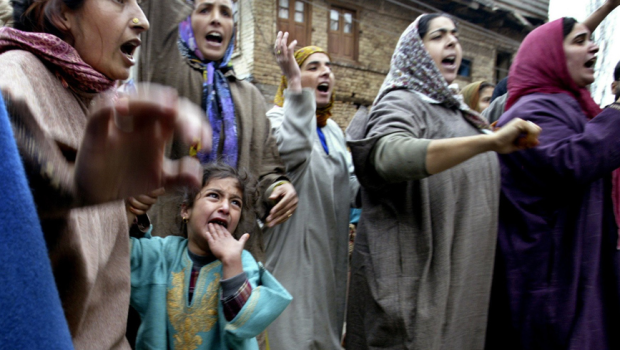 For 20 years, Kashmir has convulsed with violence. The conflict’s toll has been steep and locals believe life here will never be the same. A patient at a mental hospital in Srinagar, Kashmir.

SRINAGAR, KASHMIR—No one can be sure what made Sheik Ghulam snap.

One moment, he was a soft-spoken auto rickshaw driver, navigating the streets of this city of 1.2 million. The next, he was sprinting through his neighbourhood, shrieking and pelting his friends and relatives with rocks.

When police arrested the slender 33-year-old, they delivered him to Srinagar’s mental hospital, where he was given a pair of plaid pyjamas and ushered into a ward with six beds.

Two days later, Ghulam sat in the courtyard of the Government Psychiatric Diseases Hospital and spoke to Dr. Mansoor Dar.

“How is your head?” Dar asked.

“It’s impossible to say right now what’s wrong with him,” Dar said. “With the violence this state has known over the past decades, the trigger for him could have been anything.”

The stunningly beautiful Kashmir valley has become a petri dish for psychological disorders and the cause is not a mystery.

India is a teeming country on the move. Twenty years ago, it was on the verge of bankruptcy; today it is poised to become the world’s third largest economy, surging at some 9 per cent per year. Government officials and business leaders are walking tall, buoyed by an ever-growing self-confidence.

But not in Kashmir. Here, many walk with slumped shoulders and glassy-eyed stares. For the past 20 years, this state has convulsed with violence, lurching from one crisis to the next.

The conflict’s toll has been steep and locals believe life here will never be the same.

“We know other countries like Sri Lanka and Sierra Leone have experienced violence but every family in Kashmir has been affected for 20 years,” says Showkat A. Motta, the editor of Conveyor, a Kashmiri magazine. “This place will never heal.”

Predominantly Muslim Kashmir sided with Hindu-majority India. Pakistan formally invaded and after a cease-fire, India was left with two-thirds of Kashmir.

A United Nations resolution calling for a plebiscite of Kashmiris never happened.

For decades, there was a tenuous peace in this stretch of mountain ranges and valleys, with bright yellow and orange fields of mustard and saffron.

But during the 1990s, the peace unravelled. There were 7,922 attacks with explosives, 3,553 abductions and 9,393 random shootings during that decade, police say.

Tens of thousands have died in the fighting and this summer the state’s human rights commission revealed the discovery of 2,156 bodies in unmarked graves.

There are emotional casualties.

The abuse of prescription drugs is surging among youth, a trend doctors attribute directly to the fighting. Domestic violence is spiking. There is a two-month wait for a bed at the government-run de-addiction centre in Srinagar. Kashmir’s suicide rate is estimated to be as high as 45 per 100,000, more than four times the national average. In 1989, before the insurgency, the rate in Kashmir was 0.3 per 100,000.

The number of patients who are admitted to Kashmir’s psychiatric hospital has increased to 100,000 a year — 273 per day — up from 1,800 a year in 1989. Psychiatrist Mushtaq Margoob, in a published a study of 1,200 people from four of Kashmir’s 10 districts, concluded that 59 per cent of respondents had been victims of a traumatic experience.

Mental health problems have become so pervasive that post-traumatic stress disorder and other mental illnesses are being tied to infertility in women.

“The majority of people will tell you it’s the will of Allah, but it’s so far beyond that point,” Margoob said. “There has been a shift in the circuitry of their brains. People here are always in a hyper-arousal state, expecting something to happen at any minute, someone coming into their home for an arrest, shooting in the street, something like that. And it’s leading to hormonal disorders in women.”

An international airport opened here in 2007 and politicians travelled from New Delhi to commemorate the occasion, which promised to provide a spark for the state’s faltering economy. But direct flights to Dubai were cancelled after about two months because of security concerns.

It’s hard to find a restaurant that isn’t shuttered behind steel doors by 6 p.m. Contrast that to New Delhi where billboards advertise KFC’s all-evening home delivery.

At the city’s main market, Lal Chowk, the Paladium movie theatre hasn’t shown a film since 1989. It has been occupied by security forces who live in a camouflaged bunker, surrounded by sandbags and barbed wire.

“Especially around Eid,” said one merchant. “We have three models and they sell fast. The kids like to shoot.”

Inside homes, there is similar evidence of stress.

Parents demand that children, even those in their 20s, be home by 6 p.m. Text messaging has been banned for those who use prepaid SIM cards on their mobile phones. The Indian government has started monitoring Facebook, YouTube and other social networking sites looking for hints about planned protests and potential militant recruits.

“Before the 1990s, this was such a peaceful place,” Motta said. “We didn’t even have a word in Kashmiri for suicide and had to use an Urdu one, khudkushi, when they started showing up here. There was just so much death, 20 or 30 every day, that it was page-one news when a day went by and there weren’t killings in the 1990s. An entire generation was raised in that climate and now we see what that produces. Tempers are so short and people are scared.”

The fears have even given rise to a new local industry: dog kennels.

There are at least six in Srinagar that sell German Shepherds for at least $125, Motta said.

“You see people with dogs in their homes for protection more and more recently,” Motta said. “That’s not usual for Muslims.”

In 1996, an especially violent year, Ahmad’s younger brother was killed in the streets by crossfire between Indian security officers and insurgents. The following year, his older brother disappeared while coming home from his job as a carpenter.

“After that we had soldiers routinely coming into our house during the day, during the night, whenever they wanted to,” said Ahmad. “They kept asking me where my brother was and if had he gone to Pakistan for militant training. I said, ‘You tell me where he is.’

“The soldier just looked at me and said, ‘You ask me again and you’ll join him,’” Ahmad said.

How the violence has affected him?

“I can’t remember what is a good sleep,” he said, shaking his head.

Dar, the psychiatrist, said he sees at least 50 outpatients a day, and struggles with the powerful stories he hears.

“One woman in her mid-60s. . . , her son was killed in front of her, and she kept setting his place at dinner and putting rice and food on his plate,” Dar said. “She didn’t sleep. Just sat at the table. When the rest of her family got up in the morning, she insisted she’d been talking to him during the night. It was hard on everyone in that family.”

Margoob, 54, has been at the centre of mental-health care in Kashmir since 1981. He remembers juggling the treatment of soldiers and militants, some of whom placed machine-guns in the chair next to them as they spoke of their problems.

Margoob said there is reason for optimism amid the gloom.

In the spring, he hopes to announce the opening of a mental-health centre specializing in post-disaster treatment. He’s also expecting funding by April to deploy a team of mobile clinical psychologists to each of Kashmir’s districts.

“My belief is finally people are starting to join hands and see the problem,” Margoob said.

But the job of treating Kashmir’s mentally ill is daunting.

The effects of years of war have reached every corner of society — even Shabir Ahmed Mir’s butcher shop in the shadow of Srinagar’s Jamia Masjid mosque.

“It used to be that I had to kill the goats and clean them and bring them to the market because people didn’t like the sight of the blood,” said Mir, 33. “Not anymore. No one has a problem now taking the live goats home and killing them. People’s hearts here have become tougher.”